There Are Three Classes Of Bathroom 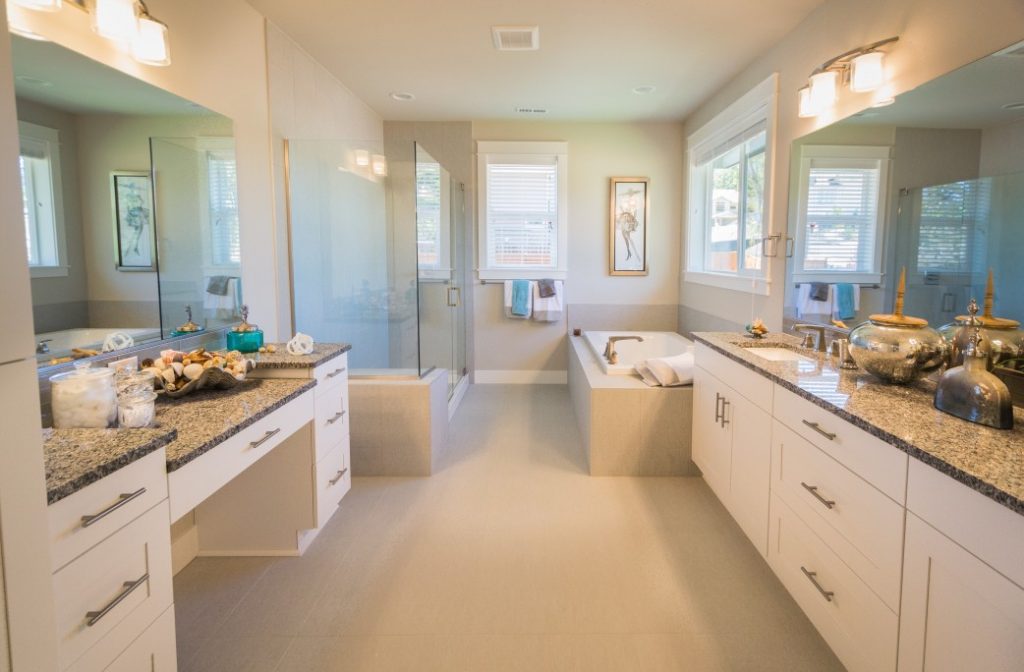 This is what often ends up attached to a master bedroom, or acts as the main/central bathroom in a house. A full bathroom is often 50 square feet or more and has everything you’d expect, with at least one toilet, one sink, and one bathtub, and a shower.

To be considered a “full bathroom,” the minimum square footage typically starts at about 40’, as 32’ is normally considered the minimum for a bathroom with a shower stall in it. Another typical characteristic of these bathrooms is the generous vanity counter space allotted to the sink and grooming preparations. This is often the bathroom where make-up, hair styling, shaving, and other grooming are done because of the available storage and counter space.

This is often a popular choice as a second bathroom addition. A ¾ bathroom is usually maxed out at about 40 square feet, with a minimum of 32’. It still has a toilet and sink, though the counter space is often less generous. There’s also usually only one bathtub or one shower, though a shower is a more popular choice for smaller spaces.

¾ bathrooms go over well in family residences because they are “complete” enough to allow another person to go through a typical full morning routine when everyone is usually getting ready for work or school within roughly the same window of time. With a ¾ bathroom, two people can have morning showers alongside brushing teeth and other grooming if all of that is required before facing the day.

At the smallest end is the ½ bathroom. Sometimes, this may just be a very small ¾ bathroom, as the biggest size for this is 32’ just enough to admit a shower stall. However, half-bathrooms typically have only a toilet and sink, which means that these bathrooms can fit into as little as 10-12 square feet with proper planning.

In the same that ¾ bathrooms are popular for crowded homes, the ½ bathroom fills a similar role and is especially useful for when more than one person needs to use the toilet, but not necessarily take a bath or shower. For homes that entertain many guests or have larger families, this is again a popular choice. In some instances, there may be more than one ½ bathroom built into a building since the smaller square footage makes it possible to put them in many places, such as under a staircase to utilize what would otherwise be “dead” space in a home.

Talk to your bathroom remodel contractor about your bathroom reconstruction options. With the right bathroom addition, you can add more comfort, convenience, and even value to your home.